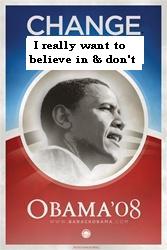 I voted today and did as I said I would do and voted no preference for the Democratic nomination for President because I am profoundly dismayed and angered by the lack of backbone shown by Barack Obama during the recent attacks upon his faith and the Black Church.

I struggled mightily. The twenty minutes I stared at my ballot seemed like an eternity. I went back and forth several times. Surrounded by other blackfolks, I became self-conscious. I wrestled with the lie I told the cheerful White Obama canvasser who ambushed me as I left my home. I then struggled with the commitment that I felt strongly enough to tell all of you about and my twenty-five year desire for a black President.

I teared up a bit and stared at the paper some more. My thoughts drifted to a dear friend’s 25 year-old brother lying comatose in intensive care, the victim of double aneurisms, dangling somewhere between life and death, and I wondered what is so damn wrong with refusing to compromise your core values and living the life God gives you informed by Trinity United Church of Christ’s motto “Unashamedly Black and Unapologetically Christian.”

If the Father gives that boy a second chance at life, as I pray he does, I have no doubt that he will live his life to the fullest and without regrets. He comes from a proud Nigerian household and their love and commitment to each other is uniquely powerful. It makes me proud to know his sister and count her as one of my dearest friends. Their pride in their heritage makes them stronger as black people and as a family. It is unfathomable to me why Obama, a son East Africa, is afraid to embrace the power of his black religious heritage and stand on what I know he believes but refuses to confess to White America.

And yes, contrary to his 2004 Democratic National Convention speech, there is a White America and a Black America. And they are separate and unequal because we are not one people and never have been.

I watched Bill Moyers interview with Dr. Wright last night and heard nothing a reasonable person who understands the depth of African American suffering and the shame of our country’s history of slavery, genocide, and Jim Crow could be offended by.

Still grappling with my decision, I remembered Obama’s Friday presser. Senator Obama continued to distance himself from his Pastor of two decades yesterday by continuing the use of his weasel word mantra of “profound disagreement” over Dr. Wright’s, “objectionable” comments and why he and White America, “took offense.” I marked my ballot, smiled at the sistah who took my name and gave me ballot, and strode confidently back to my car.

Some people would rather live shackled by a cacophony of patriotic white supremacist lies than live in freedom and truth. Any campaign which genuflects to the head in the sand mentality so prevalent in White America is a campaign based on lies of political expedience and I cannot support that without protest.

If you disagree, watch Dr. Wright and Obama for yourself.

100 thoughts on “No Preference”