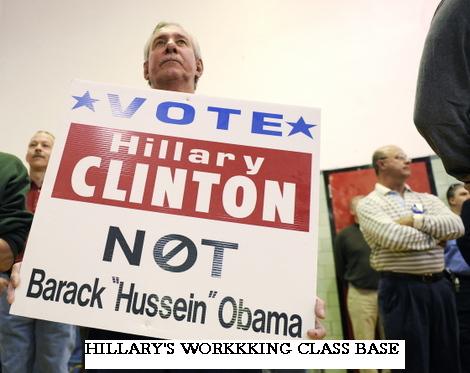 This picture crystallizes the essence of the arguments that supporters of Obama, and those Obamanostics, like myself, have been saying for months now.   Does anybody really believe that it is necessary for Hillary to demean herself on Bill O’Reilly and rub shoulders with Richard Mellon Scaife, to communicate with White Democrats and Independents if you’re not consciously trying to send racially coded messages to the white working class.

What was Hillary’s dig yesterday regarding Jeremiah Wright about if not a blatant attempt to give permission to the White working class to punish Obama for his heretical association with Wright and vote for Hillary or McCain.

Her intention to fatally damage Barack Obama or steal the nomination couldn’t be clearer.   At this point, it no longer matters who ultimately receives the nomination because I am negatively predisposed against them.   Nevertheless, the machinations are still fascinating to watch.