A Rasmussen Reports national telephone survey found that just 30% of the nation’s Likely Voters believe Barack Obama denounced his former Pastor, Jeremiah Wright, because he was outraged. Most—58%–say he denounced the Pastor for political convenience. The survey was conducted on Wednesday and Thursday night. Obama made his statements about Wright on Tuesday. 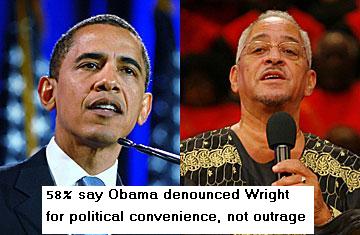 Wright held a mini-media tour last weekend capped by a press conference at the National Press Club on Monday. Only 33% of voters believe that Obama was surprised by the views Wright expressed at Monday’s press conference. Fifty-two percent (52%) say he was not surprised.

Just 7% of the nation’s voters agree with Wright’s views of the United States. African-American voters, by a 64% to 12% margin, disagree with Wright. Eighty-one percent (81%) of all voters are following the story somewhat or very closely.

Nine percent (9%) of voters have a favorable opinion of Wright. Eight-one percent (81%) have an unfavorable view. That includes 62% with a Very Unfavorable opinion. As you would expect, there are strong partisan differences on these questions. Generally, Democrats are divided while Republicans take a less charitable view of Obama.

Seventy-four percent (74%) of Republicans believe it’s somewhat or very likely that Obama shares some of Wright’s views. That assessment is shared by 48% of Democrats and 49% of those not affiliated with either major party.

Democrats are evenly divided as to whether or not Obama was surprised by Wright’s comments on Monday. Republicans overwhelmingly reject that notion. Just 36% of Democrats believe outrage was the motivation for Obama to denounce his former Pastor. That view is shared by 38% of unaffiliated voters and 16% of Republicans.