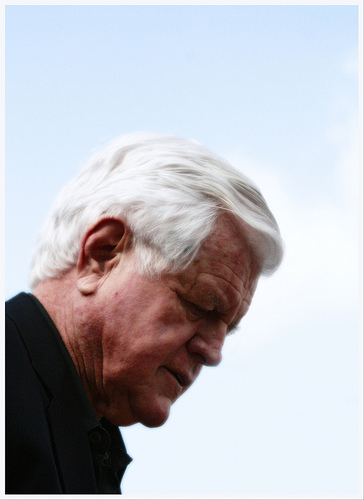 A cancerous brain tumor caused the seizure Sen. Edward M. Kennedy suffered over the weekend, doctors said Tuesday in a grim diagnosis for one of American politics’ most enduring figures. “He remains in good spirits and full of energy,” the doctors for the 76-year-old Massachusetts Democrat said in a statement.

They said tests conducted after the seizure showed a tumor in Kennedy’s left parietal lobe. Preliminary results from a biopsy of the brain identified the cause of the seizure as a malignant glioma, they said.

His treatment will be decided after more tests but the usual course includes combinations of radiation and chemotherapy.

Kennedy has been hospitalized in Boston since Saturday, when he was airlifted from Cape Cod after a seizure at his home.

The tears are coming now and I am absolutely devastated. I have no words. Nothing. I can’t breathe and the room feels like its closing in on me. I feel physically sick.  Please don’t take him now, Lord.  His work is not done.