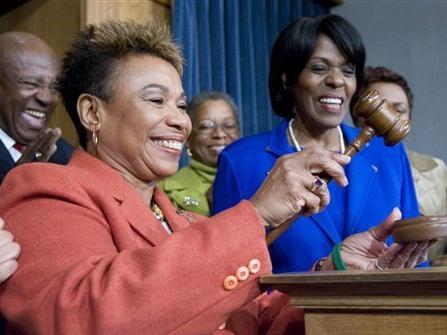 Yesterday, in a rare act of mental clarity and ideological congruence with the black community, the Congressional Black Caucus elected progressive champion Barbara Lee, 62, as it’s chairwoman.    She accepted the gavel of leadership from the galactically corrupt, inept and stupifyingly arrogant Carolyn Cheeks Kilpatrick, the worst congressional caucus chairman in all of human history.

Carolyn Cheeks Kilpatrick, the chief enabler and mother of the felonious a**clown Kwame Kilpatrick, the former “Playa Mayor” of Detroit, should’ve resigned from the chairmanship, the caucus, and the race, and been downright embarrassed to be seen in public, but the plucky doyenne of Detroit ain’t got no shame in her game.

The people of Detroit apparently do have a sense of shame and almost sent her tail back home in last August’s Democratic primary.  They sought to punish her for the incredibly tacky, ghetto soap opera of sleeze playing out daily on television and in print.

It was incredibly demoralizing how the caucus and the House Democratic leadership circled the wagons around a corrupt “public servant” who chose to empower her relations rather than her constituents by finding new and sleezy methods of using nepotism and cronyism to fortify the Kilpatrick Dynasty’s political machine.

Moreover, she led the caucus into betraying the economic interests of the black and brown constituents they’ve been elected to serve by heeding Barack Obama’s call to bailout Wall-Street instead of Mainstreet.

Normally progressive members like Barbara Lee followed her lead, listened to the House Leadership and Barack Obama, and jumped off a cliff into the waiting arms of economic catastrophe.

My prayer is that Barabara listens to the still, small voice of her mentor Shirley Chisholm and tunes out the House Leadership and the president elect on matters of progressive principle.