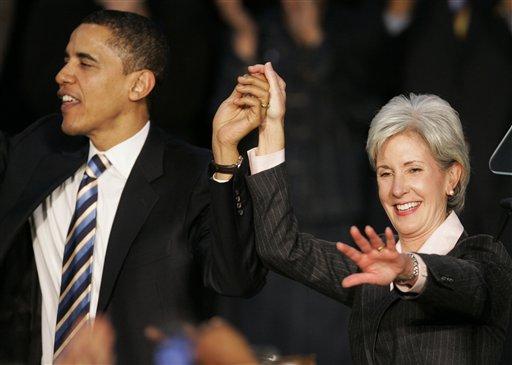 According to OpenLeft and the NY Times, President Obama has settled on Kansas Governor Kathleen Sebelius to Secretary of Health and Human Services.  I couldn’t be more pleased.

WASHINGTON – President Obama has settled on Gov. Kathleen Sebelius of Kansas, a key ally with a record of working across party lines, as his top choice for secretary of health and human services, advisers said Wednesday.

Should she be nominated, Ms. Sebelius would bring eight years of experience as her state’s insurance commissioner as well as six years as a governor running a state Medicaid program. But with Mr. Obama about to begin a drive to expand health coverage — an issue on which the parties have deep ideological divisions — her strongest asset in the White House view may be her record of navigating partisan politics as a Democrat in one of the country’s most Republican states.

Ms. Sebelius resolved a state budget crisis on Tuesday and plans to be in Washington from Saturday through Tuesday for a meeting of the National Governors’ Association. Asked about the cabinet job, her spokeswoman, Beth Martino, said the governor “is focused on the economic challenges currently facing Kansas, including our state budget and the impacts of the federal stimulus package.”

Mr. Obama’s first pick for the job, former Senator Tom Daschle, withdrew over his failure to pay $128,000 in taxes until nominated, provoking a storm of criticism and a presidential mea culpa.

With his economic recovery plan signed into law, Mr. Obama plans to turn his attention more to health care next week with a budget blueprint that will begin to advance his ideas about covering the uninsured, advisers said. He may also make health care an important theme of his prime-time address to a joint session of Congress on Tuesday night, they said.

It remained unclear whether the White House would finish vetting Ms. Sebelius in time to finalize her nomination by next week. Advisers described her as “the leading candidate” and said there were no others to mention, although they emphasized no final decision has been made.

Governor Sebelius, you’ll recall, is the woman I supported for Obama’s Vice.