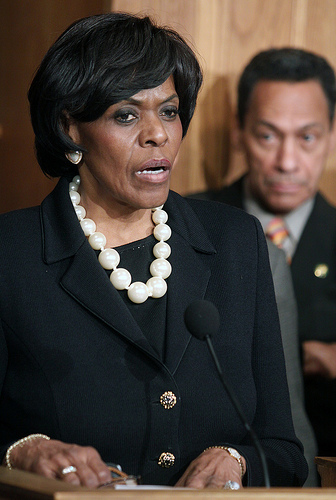 Washington — Rep. Carolyn Cheeks Kilpatrick, D-Detroit, said Thursday she and a top aide are not targets of a grand jury and will “cooperate fully” after receiving subpoenas.

In addition to Kilpatrick, her aide Andrea Bragg received subpoenas to testify before a grand jury in the Eastern District of Michigan. The congresswoman’s son is former Detroit Mayor Kwame Kilpatrick, whose actions as mayor are being investigated by federal prosecutors.

Though grand jury matters are secret, legal observers said Thursday it is likely the subpoenas relate to an ongoing federal investigation of the congresswoman’s son, and possibly her ex-husband, business consultant Bernard N. Kilpatrick.

There is no legal privilege that makes communications between a mother and son confidential, and the spousal privilege would only apply up to the time Bernard Kilpatrick and Carolyn Cheeks Kilpatrick were not divorced, said Detroit attorney David Griem, a former federal and state prosecutor.

Griem speculated the subpoenas may be related to recent cash fundraising involving tens of thousands of dollars to cover the former mayor’s restitution payments that Cheeks Kilpatrick was involved in, according to media reports.

“I’m not sure of the propriety of a U.S. congresswoman spearheading such an effort on behalf of a family member, especially when the money is given in cash,” Griem said Thursday.

Most of Kilpatrick’s recent restitution payments from his state obstruction of justice conviction came in the form of money orders, many purchased by family members. Griem said he wouldn’t be surprised if everyone who purchased those money orders was subpoenaed before the grand jury.