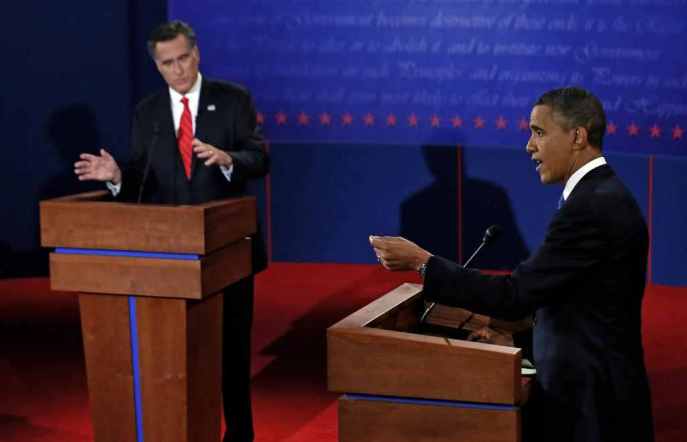 Mitt Romney is the living embodiment of a President from Hollywood central casting.  His all-American good looks and patrician bearing are reassuring to some folk and harkens back to the halcyon days of yesteryear when times were simple and dark people, women and gays knew their proper places.  Following the lead of Congressional Republicans in racializing Obama’s policy agenda, Mitt Romney’s strategists, conscious of their diminishing odds of winning this election, elected to frame their horse’s throwback candidacy in a way that intentionally stokes a sense of white racial resentment.  President Obama’s every thought, word and deed is construed as a racial attack on God-fearing, taxpaying white Americans. Whites are cast as the victims in this alternate Republican universe and Mitt Romney is the savior they’ve been praying for.  It is a lie, like everything the modern Republican Party stands for. It doesn’t matter how confidently Mitt Romney recites his lies. A confident lie is still a lie. Remain calm. There is nothing that transpired yesterday between the contenders to America’s throne that should disturb any Obama partisan.

Let’s review. In the span of 50 years, we’ve gone from, “Segregation Now, Segregation Tomorrow, Segregation Forever,” to the eleventh great grandson of the first enslaved African serving as President of the United States.  God is speaking through this recent revelation in Obama’s family tree. Can you hear him? I believe in my sanctified soul that Barack Obama’s miraculous rise to the presidency was predestined. The African ancestry traceable through his “white” mother shatters the myth of white supremacy and cleanses the stain of chattel slavery.  In Jeremiah 1:5, God tells his prophet, “Before I formed you in the womb I knew you, before you were born I set you apart; I appointed you as a prophet to the nations.”  Jeremiah 1:10 states, “See, today I appoint you over nations and kingdoms to uproot and tear down, to destroy and overthrow, to build and to plant.”  Every step this brotha has taken in the last thirty years has been ordered by The One Most High.

Eight years ago, Barack Obama was a minor state legislator nobody had ever heard of. He gamely took on the State Comptroller and a Multi-Millionaire Businessman for the chance to represent Illinois in the U.S. Senate. Heavily outspent, he vanquished them both. Plucked from obscurity by John Kerry to deliver the keynote address at the Democratic National Convention, he electrified the nation. Two opponents, including his attractive Republican opponent, self-destructed in sex-scandals. Smears, misinformation and right-wing distortions, many of the same we hear today, were employed by an unhinged Republican to stop his rise.  None worked. Four years later he went on to defeat the most formidible political dynasty the Democratic Party has ever produced to claim the Democratic nomination for President. The Clintons questioned his fitness for the Presidency and Bill Clinton dismissed his ambition as a “fairytale” and prompted Teddy Kennedy to endorse Obama after letting rip, “A few years ago, this guy would have been getting us coffee.” Oh, how the worm has turned. President and Mrs. Clinton both serve at Obama’s pleasure now.

We love him because he has always displayed the cool serenity and regal dignity that every child of God should emulate.  This is the same president that shamed Donald Trump on Wednesday, punked his ass contemptuously on Saturday, and killed Bin Laden on Sunday.  Don’t believe for one minute that an empty suit like Mitt Romney got under our president’s skin last night.  Don’t fall for that.  Obama set a trap and Romney took the bait. Romney shook his etch-a-sketch so hard that he broke it.  This is the same president that allowed Republican extremism and obstructionism to trap them into the untenable position of opposing tax cuts, a grand bargain on deficit reduction and a debt limit extension.   To hear some pundits tell it, Obama doesn’t know what he’s doing, but he always seems to come out on top.

Romney still has much to answer for. The specificity of his budget and tax plan that journalists and pundits were critical of earlier in the week sure as hell didn’t materialize last night. What we heard was a lot of nonsensical doubletalk and backpedalling from what he was saying during the primaries.  The Obama for America campaign is sure to take a hefty pound of flesh from Romney for his evasions and falsehoods.  The ads should pretty much write themselves. All one has to do is stack Romney’s inconsistencies on top of one another and call it a damn day.

The corporate media knows that this race was over a long time ago. It doesn’t want to give up the ghost just yet because it invests the empty theatrics and ridiculous posturing of the modern presidential debate with more meaning than the serious policy discussions it was designed to facilitate. The contention that stagecraft means more than statecraft is a serious indictment of our fourth estate and an indication that the systemic corruption beneath the Media’s shiny façade threatens our democracy.  We need to continue working, watching and praying for healing and racial reconciliation in our country.

Mitt Romney still can’t close the deal with conservatives, and with virtually no money or organization, Rick Santorum wins a majority of counties in rust belt Ohio.  Tonight has been very exciting. Still looking for results in Alaska to report.  Santorum continues to confound expectations and will likely be in this thing for the long haul even though there is probably no path to win the nomination this year.  As much as his extremism scares me, I continue to pull for him.  I would like nothing better than for Santorum to win the Republican Nomination because President Obama would win in a landslide.