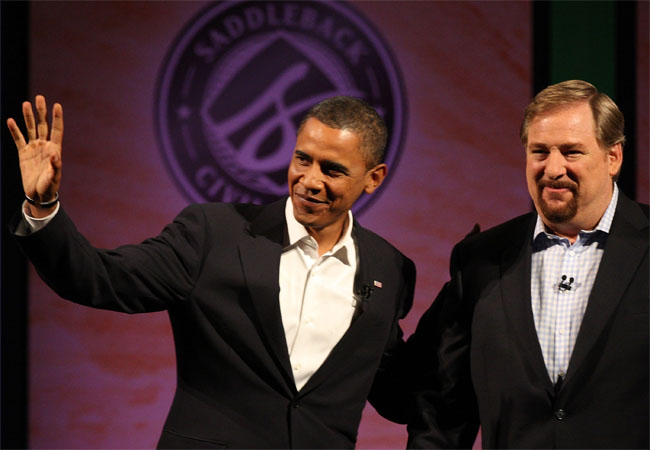 With the announcement of Rick Warren’s selection by the inaugural committee to give the invocation at the most historic inaugural ceremony in American History, it shows that the realpolitik that is Barack Obama never misses an opportunity to make a symbolic appeal. The selection of Rick Warren is significant because it extends an olive branch of tolerance to the religious conservative and evangelical christian communities that are historically so resistant to Democratic Presidential candidates. Showing deference and respect to a moderate conservative powerhouse like Rick Warren, an admitted McCain supporter, narrows the psychological chasm between people of faith and the Democratic Party.

Don’t believe me? How about the Pew Forum?

Overall, 45% of Protestants voted for the Democrat, an increase of five points since 2004…Interestingly, Obama’s gains were among white evangelical Protestants (5 points), a traditionally Republican constituency, rather than among white Protestants who do not describe themselves as evangelical or born-again (no gain).

..Just as Obama made gains among most religious traditions, he also held steady or improved over Kerry’s 2004 support among people of all levels of religious observance. More than four-in-ten people (43%) who attend religious services regularly, that is, once a week or more, supported Obama, compared with 39% who supported Kerry.

Obama’s gains were particularly pronounced among the subgroup who attends religious services most often – that is, more than once a week; 43% of this group supported Obama, up from 35% who supported Kerry in 2004. Obama also received support from nearly six-in-ten voters (57%) who attend church occasionally (a few times a month or a few times a year), while Kerry won 53% of this group.

Rick Warren, despite his faith based a conservatism, is not a sanctimonious phony like a Pat Robertson or James Dobson. He is not totally bound by the straight jacket of homophobic religiosity and judgmental hypocrisy. Pastor Warren does not believe he’s on a personal mission from God to galvanize religious conservatives into supporting the Republican Party and it’s entire slate of right-wing candidates. While he is clearly on the conservative side of the abortion divide and marriage rights for same-sex couples, he also believes that same sex couples are entitled to partnership benefits, insurance, and hospital visitation rights. That tells me he has a firm grasp on reality and has both feet firmly planted on Earth. Robertson and Dobson are literally a stonesthrow away from homicide. Their unbounded intolerance and malevolent influence polarizes people of faith and goads them into negating the gospel they profess to live by.

I know that some of you find my criticisms of Barack Obama interesting and thought provoking, but this ain’t one of my critiques. I am more interested in making policy based criticisms instead of criticisms based on political correctness. The politics of this invocation are crystal clear and I admire Obama’s peerless skills.

Barack Obama, unlike the ignorant patrician who preceeded him, is really trying to unify the nation. I can’t think of a better way to do that than inviting Rick Warren to give a purpose driven invocation.