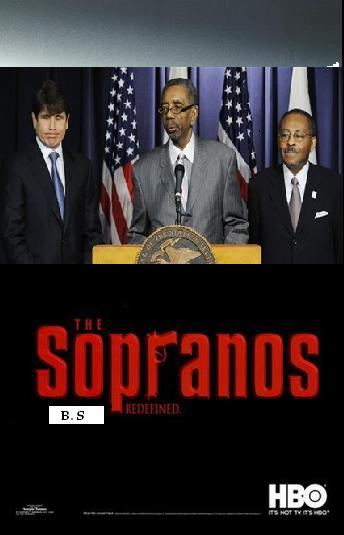 
The presser was a comedians dream and the clumsy injection of race by Congressman Bobby Rush was sadder than it was despicable. First, seeing how Bobby has physically suffered from throat cancer was heart breaking, but his reasons for supporting Blagojevich in his bulls*it was even more tragic. Poor Bobby is clearly suffering from chemo brain because Blagojevich’s bipolar antics have grown more outrageous with time, and his latest stunt is as disingenuous as it is insane. I’m with Mary Mitchell in believing that Rod Blagojevich dosen’t give rat’s arse about fair representation and he is desperately trying to disprove the allegations of extortion and contract fraud against him. It won’t work. His career is over and nothing he says or does will ever change that.

Unfortunately for Rod Blagojevich, Roland Burris is not a Magic Negro capable of absolving his manifold sins although he would like him to be. (One needs to be a palatable, focus grouped, establishment Negro creation of David Axelrod capable of raising $750 million dollars to be a proper receptacle for white liberal fantasies of racial absolution.) Burris is an uninspiring and irascible functionary that has let his ego get the better of him.

Burris has had a damn chip on his shoulder ever since he was defeated for the Democratic Nomination for Governor in 1994, a Republican year in which no Democrat would have prevailed. The people of Illinois don’t owe him a damn thing and yesterday’s cartoonish spectacle was clear proof that he has taken leave of his senses. The Lieutenant Governor, a Burris friend of 36 years, clearly would have considered appointing the 71-year-old lobbyist and former Illinois Attorney General as a caretaker Senator once Blagojevich was inevitably removed from office.

By all accounts, Roland Burris is an honest man and probably won’t ever be charged with any wrongdoing. However, the facts surrounding his lobbying firm’s acquisition of $700,000 in state contracts are worth investigating and probably will be given the Governor’s propensity for awarding state contracts to his politically connected contributors and fundraisers regardless of actual merit.

Burris gets points for running against Rich Daley for Mayor of Chicago, a man I’ve always opposed and regarded as White Chicago’s plantation puppet master, but he won’t ever receive my endorsement for the U.S. Senate. I hope the Illinois Secretary of State, Jesse White, and Senate Democrats stick to their guns and don’t certify this appointment and seat Burris.

I, too, wanted an African American to replace Barack Obama in the Senate given the dearth of Negroes in that body, but it just goes to show that the aphorism “Be careful what you wish for, you just might get it,” is a warning black Democrats should have heeded.