I didn’t see it all, but I would recommend it as a sleep aid.  What say you? 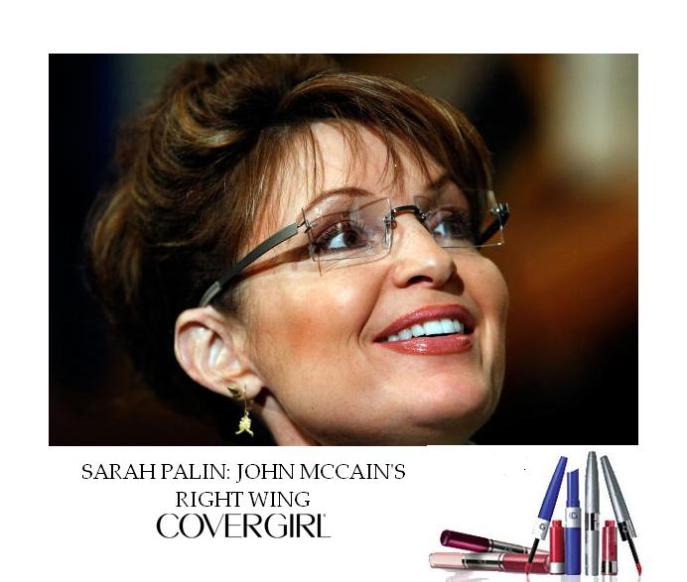 The selection of the “easy, breezy, beautiful” Alaska Governor Sarah Palin is the boldest act of political jujitsu seen in decades. I told y’all that Barack Obama should have chosen a woman to close the opening that this selection runs right through. Machiavelli would be proud.

You’ve heard the Republican talking points about John McCain’s right-wing covergirl. She’s a hockey mom, political reformer, and female trailblazer that has served as a city councilwoman, Mayor, State Oil and Gas Commissioner and Governor. This post is about what you may not know or haven’t considered.

While the Democratic establishment is widely panning the selection of an untested and unknown Governor Palin, I think that most are missing the bigger picture. They have panned this choice as a nakedly illogical pander to white women, which is certainly true, but politics is not about what’s logical, it is about what people really feel and will never say. The most diehard Hillarycrats and PUMA activists have already pledged their support to John McSame, a rigidly pro-life conservative opposed to women’s reproductive rights, feminism and the concept of equal pay for equal work. Hillarycrats have panned Barack Obama as an empty suit and unqualified usurper who screwed Hillary Clinton out of her divine right to become the Democratic nominee.

As Tim Wise has written, the various excuses thrown out by Hillarycrats, like gender solidarity, blaming Barack for Hillary’s sexist manhandling by the media and Obama’s qualifications, conveniently masks Hillarycrats undercover racial resistance to the idea of electing a black president. He writes:

How is it that you have managed to hold your nose all these years, just like a lot of us on the left, and vote for Democrats who we knew were horribly inadequate–Kerry, Gore, Clinton, Dukakis, right on down the uninspiring line–and yet, apparently can’t bring yourself to vote for Barack Obama? A man who, for all of his shortcomings (and there are several, as with all candidates put up by either of the two major corporate parties) is surely more progressive than any of those just mentioned.

And how are we to understand that refusal–this sudden line in the proverbial sand–other than as a racist slap at a black man? You will vote for white men year after year after year–and are threatening to vote for another one just to make a point–but can’t bring yourself to vote for a black man, whose political views come much closer to your own, in all likelihood, than do the views of any of the white men you’ve supported before. How, other than as an act of racism, or perhaps as evidence of political insanity, is one to interpret such a thing

Karl Rove underscores the purpose of this pick for the uninitiated:

“It(s)… a clear sign from the McCain campaign that they were going to be making a very strong bid for the women whom they see up for grabs — both the traditional, swing independent suburbanites and then the Hillary Clinton supporters who remain disillusioned.”

Keep people off-balance and in the dark by never revealing the purpose behind your actions. If they have no clue what you are up to, they cannot prepare a defense. Guide them far enough down the wrong path, envelope them in enough smoke, and by the time they realize your intentions, it will be too late.

The Nation’s Christopher Hayes sights an Associated Press blurb from 1999:

Pat Buchanan brought his conservative message of a smaller government and an America First foreign policy to Fairbanks and Wasilla on Friday as he continued a campaign swing through Alaska. Buchanan’s strong message championing states rights resonated with the roughly 85 people gathered for an Interior Republican luncheon in Fairbanks. … Among those sporting Buchanan buttons were Wasilla Mayor Sarah Palin and state Sen. Jerry Ward, R-Anchorage.”

Anybody who supported any of Pat Buchanan’s presidential campaigns is a hard-right troglodyte obsessed with immigration, “states rights,” the ever-increasing numbers of colored folks in America, and the religious right’s scorched earth culture war against abortion, homosexuality and the civil rights of the GLBT community.

Governor Palin opposes abortion rights—period. No exceptions. And the Governor is also a lifetime member of the gun nut NRA. She is a cynical sop to the hard right and to fanatical feminist dead-enders who refuse to listen to the entreaties of Hillary Clinton to vote for Barack Obama.

JOHN MCCAIN IN A DRAG

The conservative woman with the ideal resume to break the glass ceiling in Republican politics was New Mexico’s Heather Wilson. With a resume that reads like a political consultant’s wet dream, Congresswoman Wilson, the first female Air Force academy graduate elected to congress, is a Rhodes Scholar possessing a doctorate in international relations and an extensive background in military intelligence. Wilson served on the President’s National Security Council before her election to five terms in congress.

As a member of congress, Mrs. Wilson serves on the House Select Committee on Intelligence. The congresswoman has a couple of problems though. First, she is a nominally pro-choice Republican who supports stem cell research that is anathema to the pro-life lobby. Second, she sat on the House Page Board and claimed to know nothing about Congressman Mark Foley’s sick trolling for male pages. Additionally, she covered up incriminating case files detailing an investigation of her husband for playing grab ass with a teenage boy.

That was clearly not going to work. However, there were certainly others to whom McSame could turn.

Every senior Republican woman on Capitol Hill is more qualified than Sarah Palin—every woman. Maine Senator Olympia Snowe—the senior woman Republican on Capitol Hill, has served in congress for 30 years, longer than John McCain. She sits on the Senate Select Committee on Intelligence.

Texas Senator Kay Bailey Hutchison has been in the Senate for 15 years having first served as a state legislator and state Treasurer. Miss Kay is a member of the Senate Appropriations Committee and serves on both the Defense and Military Construction subcommittees.

Maine Senator Susan Collins, Joe Lieberman’s Republican concubine, has been on the Hill for 20+ years. Collins served as chief of staff for her Senate predecessor and was subsequently elected to office in her own right. A senator for 12 years, she is a member of the Senate Armed Services Committee and chaired the Senate Committee on Homeland Security in the last congress.

Every single one of these woman is nominally pro-choice and neither would have solved McSame’s problems with the reactionary base of the Republican Party. In no way is this a choice based on the merits—it’s hardball politics calculated to woo white voters, especially women, wary of electing a black man to the highest office in the land.

Don’t sleep on John McCain’s right-wing covergirl. Palin defeated the incumbent Governor of her own party and the state’s last Democratic Governor to assume power in the incestuous cesspool that is Alaska politics. Her personality and forthright demeanor are her greatest asset and are the single biggest reason for her 80% approval rating. She can appeal to disaffected Hillarycrats without doing much of anything. PUMA’s Darragh Murhpy described her selection as, “Bold and Brave” on tonight’s Hardball.

In my estimation, this selection confirms the Machiavellian genuflection to Rush Limbaugh’s Operation Chaos and is an ominous symbol that the GOP is still wedded to the exploitation of race as wedge issue. So much for Obama’s attempts to be post-racial.