The unspeakable evil that is Harold Ford, Jr. has formally ended his “exploratory campaign” challenging Democratic Senator Kirsten Gillibrand.  Let the Church say, Amen.  There has never been a corporate whore more skilled in the art of seduction as Harold Ford, Jr.  He was so close to regaining a foothold on power. Ford’s bid collapsed under the weight of his opportunistic lies, galactic narcissism, rank hypocrisy and the threat of a general election challenge from the right in the person of Billionaire New York Daily News Owner Mortimer “My-Only-Concern-Is-Israel” Zuckerman.   I hope The Devil’s Advocate slithers back to the pit of Hell and den of Wall Street thieves from whence he came.

The Devil’s advocate made a triumphant return to MSNBC’s Morning Joe today. Mika all but threw her panties at Harold as he walked on set and eagerly complied with her request for a kiss in a way that made it seem there might be an assignation in their future.  It went downhill from there.

Wall Street’s crown prince of deception put on a brave face as he gravely recounted his brief foray into the rough and tumble of New York politics. Harold laid it on thick as he described his harrowing trial by fire as the victim of party bosses and unnamed insiders maneuvering against an altruistic bid to push Kirsten Gillibrand down a flight of stairs so that he could better serve the people of New York.

Joe Scarborough and Newsweek’s John Meacham played their assigned roles as keepers of the flame of Harold’s burning ambition. Poor Melissa Harris Lacewell could hardly get a word in edgewise and never laid a glove on the pedicured prince. Mika, delirious with jungle fever, acted as though MSNBC hired her to play footsie with Harold under the table. After it was over, I ran to the bathroom and blew chunks into the toilet.

The Devil’s advocate is biding his time.    I see a UN Ambassadorship in his future.  If Hillary is serious about serving just one tour as Secretary of State, and Susan Rice is elevated to succeed her, there will be a vacancy at the UN. Harold would be the perfect fit.  The UN Ambassador’s stately Manhattan residence has cachet and is the perfect place to cement his ties to the powerbrokers of New York. Moreover, he could shamelessly showcase his fealty to Israel’s war crimes and seal the cracks left by Kirsten Gillibrand’s brief flirtation with J Street, AIPAC’s moderate rival for the leadership of the Israel lobby.

Kirsten’s foolish schoolgirl flirtation with a dangerous J Street thug and Harold’s brief challenge left the door open for Mort-My-Only-Concern-Is-Israel-Zuckerman to challenge Gillibrand from the right.  It is clear that the Devil’s Advocate expects Gillibrand to lose and for a 78-year-old Mortimer Zuckerman to stand down in six years.

Senator Gillibrand just appeared on Andrea Mitchell’s MSNBC show in rebuttal to the Devil’s Advocate.  The gloating over her vanquished Negro rival was short lived and she had no real answer to the question of how she could defeat a billionaire’s bankroll. Andrea’s questions stripped Gillibrand naked in front of a national audience and her manifest weakness as a candidate was made plain. Girlfriend is doomed.

The battle is not over and the saga continues. 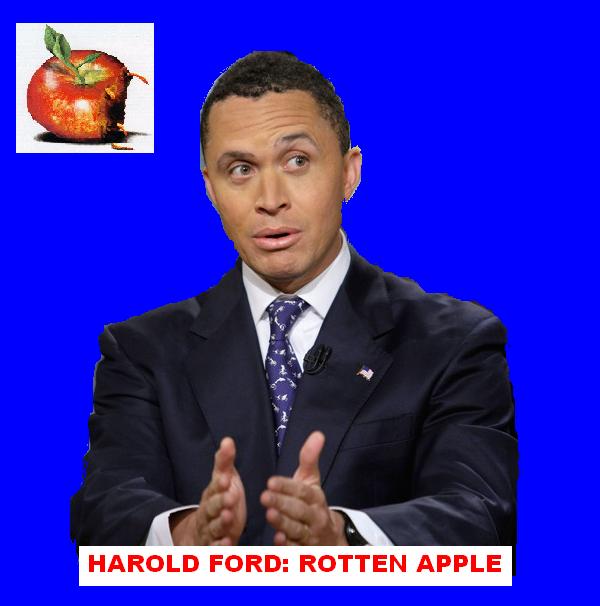 The “news” broke yesterday that former Tennessee Congressman Harold Ford Jr’s three year effort to revive his flagging political career in the cesspool of New York politics has borne rotten fruit.  Since leaving the congress, Ford has kept busy with a few media gig’s on Fox News and MSNBC as a “political analyst,” Chairman of the Democratic Leadership Council, and most important, a corporate executive at Bank of America Merrill Lynch—a bank that acquired the largest predatory lender, Countrywide. These corporate entanglements coupled with his unabashed support of estate tax repeal for the wealthiest among us make it clear to all sentient beings that Harold Ford Jr is nothing but a shameless corporate whore with an insatiable lust for power.

The day began with an appearance on “Morning Joe,” MSNBC’s corporate sponsored Salon of establishment propaganda. The Whore played coy as Mika and Joe held forth on the NY Times story detailing Harold’s courtesan seduction of powerful and prominent Jewish fundraisers and corporate heavyweights in an effort to line up enough cash to mount a serious primary challenge to Hillary Clinton’s designated successor, Senator Kirsten Gillibrand.

The Whore even got Mayor Michael Bloomberg to say he would “take a look” at supporting him.  Y’all can believe what you want to believe, but the Whore is serious about this sh*t.  In one fell swoop, he has damn near neutralized Chuck Schumer, a man not to be trifled with.

Schumer considers himself the godfather of New York Politics and certainly the top Jewish pol. When he couldn’t control Mayor Bloomberg, he put his wife, Iris Weinshall, in his administration as one of Bloomberg’s commissioners.  Former Governor Spitzer was Schumer’s top rival  and his downfall in a tawdry sex scandal was relished with glee.  Harold is playing this political game of chess like Bobby Fischer.

All of this inside baseball is important considering his unmistakable fingerprints in clearing the field for Gillibrand.  As a former Senate Campaign Committee Chair, Schumer modis operandi is to clear the field for his favorites and to dry up the money for their opponents. Threats are exchanged and favors extended. It always worked.  It worked for Gillibrand up until now. Steve Israel and Carolyn Maloney dropped their bids after being passed over for appointment after being threatened by the White House at the behest of Schumer. 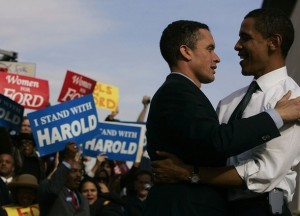 But after looking at the love in these two men’s eye’s, I seriously doubt whether a call from the White House will be forthcoming this time.